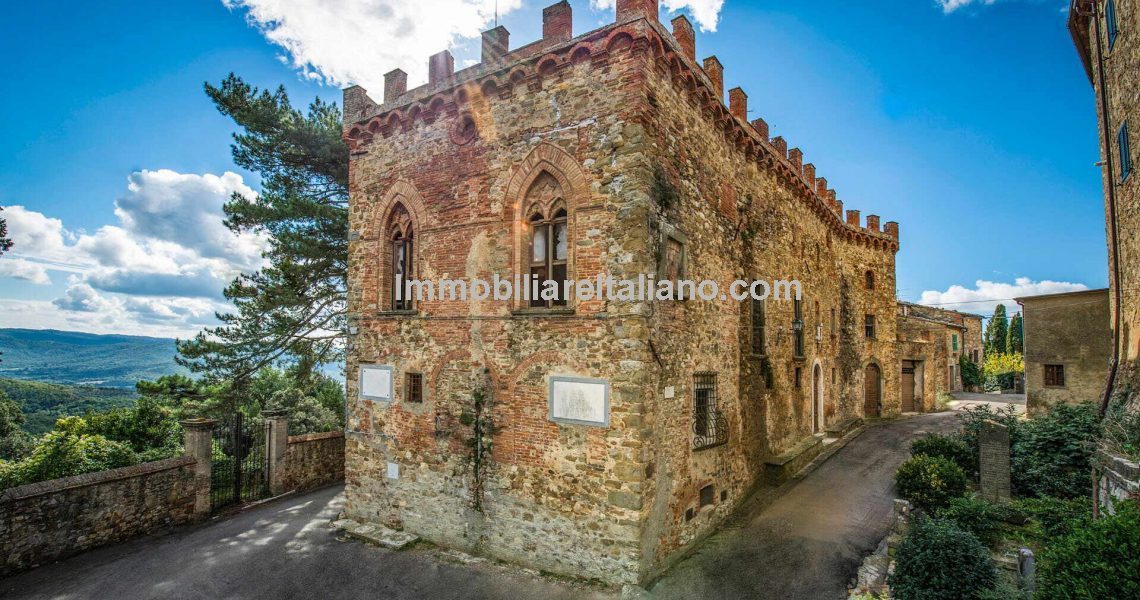 Historic Castle for sale in Tuscany. Located in the Valdambra region close to Bucine. Sadly neglected this medieval castle (16th-century origins) will need restoration and renovation.

Historic Castle for sale in Tuscany

The original core of this Historic castle (613 sqm – 6,596 sqft) dates back to the 16th century, but the building we can see today is the result of many enlargements and modifications which took place over the centuries.

The ground floor is made up of small service rooms (modified at the beginning of the 20th century for farm use). In the centre of this floor, there are the two staircases leading to the first floor: the first one linear (with vaulted ceiling) and a secondary well. From the entrance hall, one can go both right or left, into two sections (not linked between them). Here there are the kitchen (with fireplace) and a small bathroom.

The first floor (piano nobile) has a better-planned layout, based around a central corridor. In the north-eastern section are the reception hall (as large as the building) decorated with luxury finishes (ceiling coffers and moulded bracket). Another room opens from the south-eastern side with a balcony. Here we could find in the past a decorated fireplace with pietra serena elements and a multicoloured hexagonal-tile floor. On the south-western side, the first floor opens on a crenellated terrace. Finally, another staircase well reaches the terrace on the rooftop.
A careful study of the castle, together with the apparently chaotic distribution of the rooms, shows how the building is the result of multiple enlargements and modifications which took place over the centuries. There is no way to understand which alterations took place between the 16th century (Capitani di Parte Guelfa, Popoli e Strade from 1584) and the Catasto Leopoldino since the maps from the Capitani are pretty simple and do not give accurate data about the building itself. Modifications in the last two centuries would have contributed to the enlargement of the building, which was much smaller in the Catasto Leopoldino (1834) than it is nowadays. Interventions in Neogothic style took place after this year and not before 1877. The tower, a cliché of medieval buildings, is a later addition (before 1902 based on a photo of that year already showing the tower in its place) and is not connected with the interior, thus having a merely decorative purpose.
Between the 19th and 20th century in Italy a new movement arose with the idea of a continuation of styles which wanted to break with the Classicism in favour of a medieval style. This medieval revival interested both single monuments (like the Mackenzie Castle in Genova and the Rocca di Crespi d’Adda built between 1893 and 1905) and entire hamlets (like the Borgo Medievale del Valentino in Torino). These buildings are the result of a rediscovery of popular values against the sketchiness of Neoclassicism, with structures recreating an idealized Middle Age which never really existed. Often (but not always), these works didn’t involve artists and schools and that’s why structures are not touched at a deep level and work involved only a cover (like a shell) around the building.

Façades are made out of sandstone and masonry without an apparent logical distribution. It is clear how different materials have been used through the years to cover subsequent enlargements of the buildings following the criteria of what materials were easier to find in the area. Pinewood fixtures, where still present, are in good conditions.
The terrace on the rooftop is covered in a tar coat protecting the building from water infiltrations and preventing mould formations.
The lack of care during the use as a farm caused heavy degradation on the inside, where water infiltration (now resolved) caused the detachment of plastering and the loss of wall decorations (where present). As of today, the building is in builder’s finish: ceilings have been recovered with a system of wooden beams and the screed for the floorings is completed. Walls and systems (electricity, water, gas…) need to be installed.

A proposal for the recovery of the historic castle building has been forwarded and aims to connect the building with the surrounding territory: the environmental and cultural interests of the many hamlets of the area are a valuable attraction. The idea is to make the castle a reference point for cultural, economic and environmental initiatives.
Given the past use of the building as a farm, the sale of products from local entities would restore a connection with the economy of the area.
The basement (where two more rooms will be opened up, they are visible through holes in the walls) will host an information point with a small shop. In one of the recovered rooms (equipped with an independent access) one could set up a bike-renting business to be used in conjunction with the numerous tracks and paths present in the outskirts of the town.
The ground floor could accommodate a hostel, with a kitchen and a dining room in the 16th century lodge. Bedrooms would be located along the south-eastern wall, taking down several walls built throughout the centuries after the original building (thus not historically relevant). Once completed, these rooms could host up to 30 persons. At the centre of the floor, there will be a corridor and the reception area of the hostel.
The first floor, with its decorated and nicely-embellished rooms, will host a library with a multimedia centre, while the adjacent room will be a didactical entity with temporary and permanent exhibits. The hall with access to the terrace will become a food-court (or even a bar) which could be used by the guests and visitors of the building. A bathroom will be built next to the staircase.
Finally, the terrace on the rooftop will be recovered to be used as a panoramic point of view over the beautiful surrounding landscape. The tower, currently unused and with a solely decorative purpose (there is not even an access), will be made usable with the demolition of a wall at the base of the turret.

Of course, at the moment these are just proposals and other ideas uses could be promoted both commercial and residential.