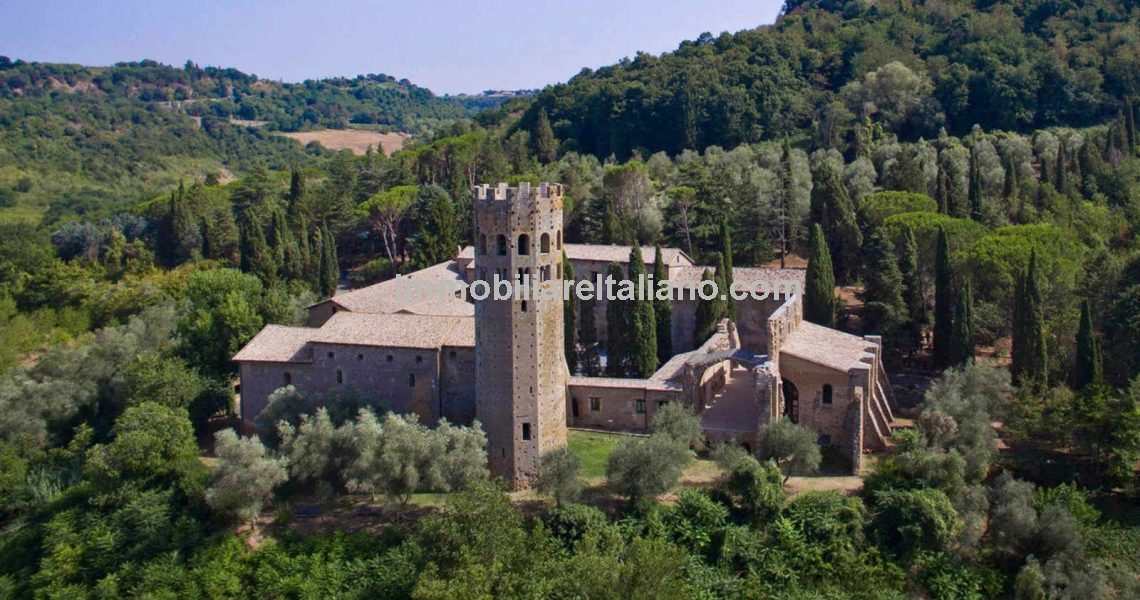 Hotel business for sale in Italy, near to Orvieto in Umbria, a 12th-century medieval castle style abbey which has been converted into a luxury hotel with 29 bedrooms. An ideal wedding venue.

Located in a quiet but easily accessible location the property is ideal for both tourism and special events such as weddings, especially as the property enjoys the use of a medieval church (not owned).

The main part of the property is the old abbey, with a surface area of 2,438 sqm – 26,235 sqft with 22 bedrooms and 28 bathrooms, which dates back to the early Middle Ages and has had various additions and modifications over the centuries.
– Ground floor: entrance, reception area, bar, two large professional kitchens with pantry, two large breakfast rooms, a meeting room (which can also be used for breakfast), a large restaurant for guests and six bathrooms. The ground floor rooms have recently been renovated, with a complete restyling in 2006 and renovation of floors, lighting and electrical systems.
– First floor: nine double rooms with en-suite bathrooms, reception for the hotel, living room and three suites with a bathroom (which continue on the second floor). The floor was completely renovated between 2003 and 2006. The double rooms are all air-conditioned, some overlooking Orvieto and others overlooking the countryside. The renovation of the rooms dates back to 2003 – 2007 with a subsequent restyling in 2014. The main suite overlooking the cliff of Orvieto and the Romanesque church of the abbey was completely renovated in 2003 – 2004. The corridors leading to the rooms have walls in original tufaceous stone with mullioned windows typical of the area decorated with original capitals. Only small areas of the masonry have been renovated and replaced in the 20th century.
– Second floor: living room, two bedrooms with shared bathroom, six double bedrooms with en-suite bathroom, keeper’s bedroom with en-suite bathroom and suite with bathroom (which continues on the third floor). The lighting is provided by modern LED lights embedded in the ceiling. The entire floor was restored in 2007, while in 2014 a restyling of furniture and services was carried out.
– Third floor: various attic rooms, water plant for the abbey and bathroom.

The old fortress with the adjoining former cloister of the abbey, surface area 922 sqm – 9,918 sqft with 7 bedrooms and 8 bathrooms, is structured on three floors composed as follows.
– Basement: laundry, cellar, storage rooms and thermal power plant (the premises also serve the abbey).
– Ground floor: two suites with bathroom (Jacuzzi), three bedrooms with bathroom and a large office area with toilet. All the rooms on the floor have been renovated in the past years and in 2014 a restyling was carried out, with the addition of modern furnishings and the installation of a led lighting system.
– First floor: two suites (one overlooking Orvieto) with bathroom (Jacuzzi) and two living rooms. As for the ground floor, the suites underwent a makeover in 2014.

Not far from the main complex is the pool area, consisting of an underground building to be restored that would include the changing rooms, an outdoor bar, the water filtration rooms, the closet and the showers. For these rooms, there is also an extension project for the realization of a wellness centre.

As mentioned previously, the property is also authorized to use the splendid medieval church present in the complex, which however is not owned.

This lovely Hotel business property is surrounded by about 11.6 hectares of land with woodland (3.6 ha), olive groves (1.6 ha) and arable land (6.4 ha). The area dedicated exclusively to accommodation is approximately 17,500 sqm. The sections are variably covered in asphalt, paving in brick and paved, and can be used to park vehicles (about 3,200 sqm). The property is connected to the municipal road via a paved avenue decorated with cypress trees. In 2013, a streetlight and LED spotlight system was installed.
The gardens of the abbey, about 8,900 sqm, are bordered by stone walls and hand-crafted chestnut wood railings. The squares (about 1,200 sqm in total) are located around the buildings and form the cloister, the outdoor area of the restaurant and the church square. Also in 2013, a lighting system was installed to enhance the tuff walls of the structure.
Not far from the complex there is a synthetic grass tennis court, renovated in 2005, and a 17 x 9 m swimming pool.